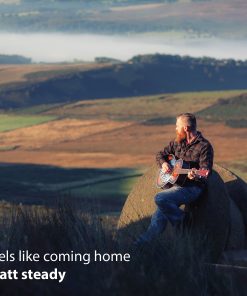 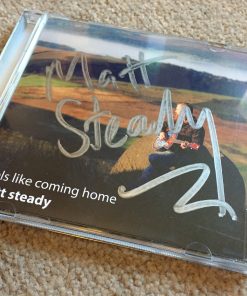 Matt Steady, transatlantic tri-virtuoso, emerged in 2015 with Blood is Thicker than Gold. I call him a “tri-virtuoso” because he seemed far more adept at rhythmic western rock, American-style roots blues, and Celtic-inspired folk music than many people who specialize in just one of these genres. After an interview, I was still left wondering what direction this newcomer to the recording scene would go with his promised second album. Feels Like Coming Home is far from disappointing in its continuation of Matt’s exploration and innovative genre-blending “visits” spanning the British aisles and the American west.

A musician honing the craft of album-building inevitably has to grapple with their priorities. Sure, countless decisions go into the construction of every individual song: which lyrics, which instruments to use, and the gear that will be in the recording room, to name but a few. These occur on the micro scale, a place where small artistic choices and daily executive decisions make the difference between chart toppers, indie masterpieces, and the rest. But on a broader level, the solo artist has to deal with having absolute control of how the record is put together. Will the energy build throughout, leading to a climactic – perhaps noisy – finish? Should the artist favor a more balanced approach, or do rhythm and pacing ultimately take backseats to lyrical theme progressions? Intelligent people butt heads over these things all the time in bands, but the solo musician has the weight of the final call all alone.

Steady, though not one to be too rigorous about structure over quality, has loosely grouped the album into two halves, whether or not by design. From the first six or seven songs, you’d be forgiven for assuming the whole record is a character study on a wandering man – he hits the bottle in “Hello old friend” (track 1), spins the dice in “One More Round” (2), and thinks recurrently of his family in tracks 3-6. We have the impression of a blue-collar vagabond, maybe the down-on-his-luck Roamer from Steady’s first compilation, making his way as a family man for the first time.

Everything changes, however, with those first ethereal notes of track 8, “1946.” In just two minutes, we traverse an intimidating soundscape that is transformed from an enigmatic mist of ambience into a vibrant Celtic violin soliloquy and culminating in its last two minutes with a driving electric guitar that falls back into the mists again with a light piano accompaniment. And if this weren’t enough variety to convince you of Steady’s range, the next track returns to western-sounding acoustic guitar for “Indecision,” which can’t help but bring strings back into the spotlight.

From here, it’s like the master has taken off his blindfold and freely mixes stylistic influences. Crith Gablach is an alien voyage back in time to the earliest days of Irish society, the title a reference to an Irish tract that endorsed the social, cultural and legal separation of commoners and nobility. Despite occurring in a time and place almost entirely unlike the presumed setting of the first half, that idea of class differentiation seems all too familiar to the persona Steady has constructed so meticulously before now. The subject matter of an important antique document was not chosen at random to clash with the ideas put forth in the work prior to this song. The last three songs are a whirlwind; “Last grand piano in Gaza” (track 11) uses strumming acoustics in harmony with fiddle and drum to tell a tale of ruin, only to give way to an assertive cover of “While my guitar gently weeps” (12) and an inspired violin solo that lasts for over six minutes (13).

Writing album reviews is ordinarily a challenge to find something interesting to say about twelve or so tracks that all sound somewhat alike. The challenge with Matt’s work is to avoid writing an entire page about each song and finding the threads that bind the tracks into a fully fleshed-out composition. I have to admit that I wasn’t grabbed too strongly on my first pass through Feels because of what I expected after Blood blew me away. This is a record that begs to be listened to, if not in its entirety in one big sitting, then in pieces compared against one another and within the whole. By now we’re past the point of debating Steady’s skill. It would take some ludicrous distortion to portray him as someone who can’t play his many instruments with competence and expertise. We might discuss the way he arranges the song order, but the construction of each as a work of art is not a topic I’d give much ground on. To be sure, I’m a fan of Matt Steady – even though the genres he works within may not be everyone’s top choices, it would be a great disservice not to respect the powerhouse performance he’s producing with each new album he releases.